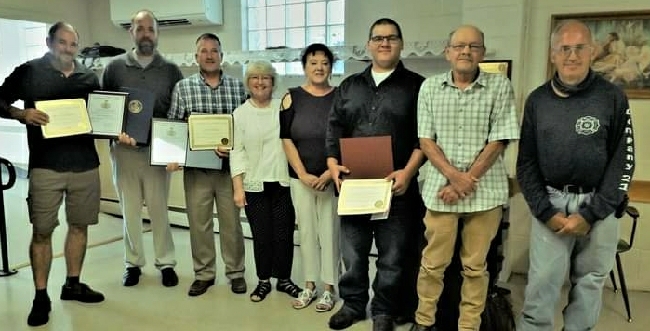 In the early morning hours of June 25, three Penelec FirstEnergy employees risked their own lives to save the life of Loretta Stevens (fifth from left in photo), who was trapped by heavy smoke in a second-story bedroom of her burning Asylum Township home.

The three men were working in the area and spotted the smoke. After calling 911, they rushed to the house and used a ladder to reach Loretta. Bret broke through the window and then carried her to safety. The home was destroyed by the flames.

I presented each of them with a certificate
in recognition of their brave and selfless deeds, which are much appreciated and will be long remembered by the community. Loretta is forever grateful to them and thanks God they just happened to be working nearby.

Also pictured are (L-R) Dan Dieffenbach, Penelec operations manager; and Jeremy Sheets, Steve Radney and Zeke Hitchcock of the Wysox Volunteer Fire Company, which was also recognized for its efforts on that day. Travis White did not attend the service.

Rep. Owlett: ‘Our Kids Are Not Political Pawns’ in politics of PA masks mandate