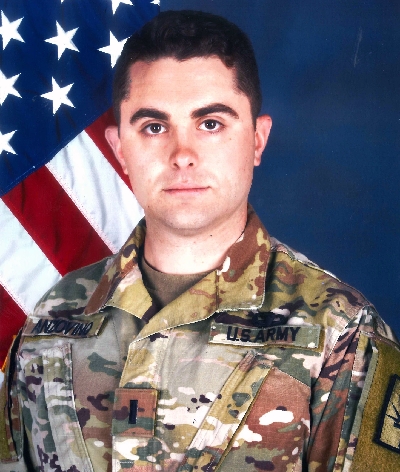 The ceremony included the traditional military change of command where the guidon, or flag, of the Forward Support Company, was transferred from White, the outgoing commander, to Anzovino, the incoming commander, by Lt. Col. Wing Yu, battalion commander.

Traditionally the unit flag indicated the location of the commander on the battlefield, enabling soldiers to see who they were to follow into battle.

The Forward Support Company provides direct logistical support to the other companies within the battalion, ensuring soldiers are fed, materials are transported, and equipment is fixed and fueled in a timely manner. Within the 204th Engineer Battalion, the FSC is tasked with supporting multiple engineer companies in order to complete various construction projects.

1st Lt. Timothy Anzovino was commissioned as a 2nd Lieutenant in May, 2012, through the Lehigh University Army ROTC program. He originally served as an Ordnance Officer in the Pennsylvania National Guard. In 2016, Anzovino transferred from Pennsylvania to the New York National Guard and was assigned to the Forward Support Company of the 204th Engineer Battalion in Binghamton as a Maintenance Control Officer and later Executive Officer.

In his civilian life, Anzovino works as a Trainmaster for PanAm Railways, where his duties include overseeing daily railroad interchanges and managing train crews across New York, Vermont, and Massachusetts.

Capt. Brett White had served as the commander of the 204th Engineer Battalion Forward Support Company since 2016. His new assignment will be to the 53rd Digital Liaison Detachment in New York City as a logistics officer. He was deployed to Afghanistan in 2014 as a platoon leader with the 133rd Quartermaster Company.