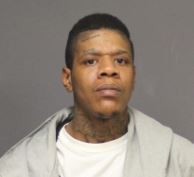 Endicott police announce an arrest for Attempted Murder after investigation of a domestic incident in the 100 block of Lincoln Avenue in the Village of Endicott.

The domestic incident occurred during the early morning hours of Jan. 19 where the suspect fired a handgun at two victims. Neither was injured. Shortly after the incident, Endicott police requested public assistance locating a man identified as Fly Brown, who was sought for questioning related to the incident.

Investigation led police to 22 Lincoln Ave., Endicott, where Fly Brown was located and taken into custody. The arrest was conducted by the joint Broome-Endicott SWAT team, with assistance from the Broome County Sheriff’s Office and New York State Police.

Charles F. Brown, a.k.a. Fly Brown, age 31, of Endicott, has been charged with one count of Attempted Murder in the 2nd Degree. He was held at Endicott Police Lock-up before arraignment at the Broome County Centralized Arraignment Part Court in the Broome County Correctional Facility.

Investigation into the matter is continuing. Further charges are pending but no further information will be released at this time.