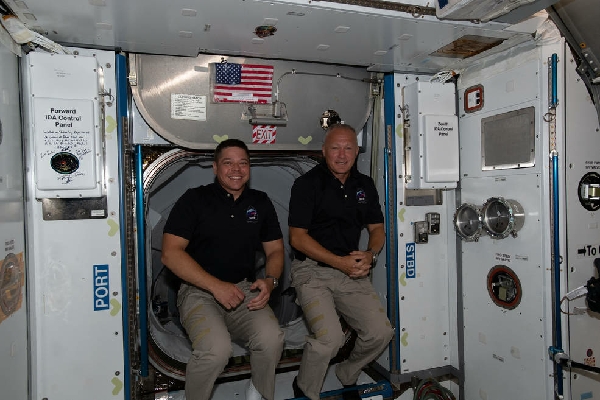 NASA will provide live coverage of activities leading up to, during, and following the return of the agency’s SpaceX Demo-2 test flight with the agency’s astronauts Robert Behnken and Douglas Hurley from the International Space Station.

Hurley is a 1984 graduate of Owego Free Academy. He was born in Endicott, but considers Apalachin to be his hometown. Hurley is the spacecraft commander for Demo-2, responsible for activities including launch, landing and recovery. He was selected as an astronaut in 2000 and has completed two spaceflights. Hurley served as pilot and lead robotics operator for both STS‐127 in July 2009 and STS‐135, the final space shuttle mission, in July 2011. After graduation from Owego Free Academy, Hurley entered the U.S. Marines Corps where he was a fighter pilot and test pilot before joining NASA.

Hurley arrived at the orbiting laboratory on May 31, following a successful launch on May 30 on a SpaceX Falcon 9 rocket from NASA’s Kennedy Space Center in Florida.

NASA and SpaceX are targeting 7:34 p.m. EDT Saturday, for undocking of the Dragon “Endeavour” spacecraft from the space station and 2:42 p.m. Sunday, Aug. 2, for splashdown, which will be the first return of a commercially built and operated American spacecraft carrying astronauts from the space station. Splashdown and recovery could be at one of seven targeted water landing zones in the Atlantic Ocean or Gulf of Mexico off the coast of Florida.

These activities are a part of NASA’s Commercial Crew Program, which has been working with the U.S. aerospace industry to launch astronauts on American rockets and spacecraft from American soil to the International Space Station for the first time since 2011. This is SpaceX’s final test flight and is providing data on the performance of the Falcon 9 rocket, Crew Dragon spacecraft and ground systems, as well as in-orbit, docking, splashdown and recovery operations.

The test flight also is helping NASA certify SpaceX’s crew transportation system for regular flights carrying astronauts to and from the space station. SpaceX is readying the hardware for the first rotational mission, which would occur following NASA certification.

The goal of NASA’s Commercial Crew Program is safe, reliable and cost-effective transportation to and from the International Space Station. This could allow for additional research time and increase the opportunity for discovery aboard humanity’s testbed for exploration, including helping us prepare for human exploration of the Moon and Mars.