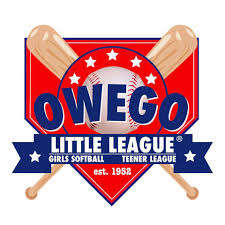 Owego Little League (OLL) is preparing to host the New York 10U Little League Championship at the Hyde Park Little League fields from July 20 to 25. Opening Ceremonies will be held on Saturday, July 20 at noon. The tournament will bring championship 10-years-and-under teams from across the state to Owego. Fifteen teams will compete for the chance to play in the East Regional Invitational Tournament.

OLL has been working on getting a tournament to Hyde Park over the last few years by making major improvements to the park so it can host these types of events. “It’ll be a big boost to the economy. Any time you can bring people from other parts of the state to come to the community and showcase what we have here, and we are very fortunate in a community that really rallies behind what we do,” said John Loftus, executive board member.

In addition to the improved fields, Owego was an attractive choice for the tournament location because it can accommodate the hundreds of players and families that will be coming to the village to stay during their games. “Owego has a lot of hotels earby, a variety of dining choices, and a very charming village. Our businesses and community are very friendly and are excited to welcome these champions and their families,” said Rebecca Maffei, director, Tioga County Tourism.

OLL was established in 1952 and is one of the only Little Leagues in the state that offers completely free participation to children. All uniforms and equipment are funded through sponsorships by local businesses and donations. All the maintenance on the park is from volunteers. Major projects and upgrades are paid for through local foundations and corporate
donations.

OLL will host this tournament for three years and hopes to petition for other championship Little League tournaments in the future.