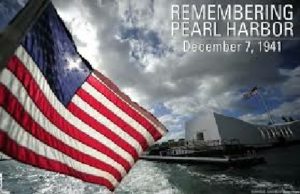 Tioga County proclaims December 7, 2019 as Pearl Harbor Remembrance Day and will present a proclamation at the commemoration on Saturday at 12:55 p.m. at the Glenn A. Warner Post 1371, Veterans of Foreign Wars, Sibley Memorial Room, Main Street, Owego.

This year marks the 78th anniversary of the military assault that took place on December 7, 1941 at
the U.S. Naval Base at Pearl Harbor, Hawaii. This assault claimed the lives of over 2,400 soldiers and citizens, caused injury to over a thousand additional people, and destruction of 20 American naval vessels, including eight battleships of the U. S. Pacific Fleet and over 300 airplanes.

President Franklin Delano Roosevelt famously proclaimed December 7, 1941, as a “date which will live in infamy,” and it has stood as a solemn day of tribute ever since. One day later, on December 8, 1941, President Roosevelt requested of Congress the power and authority to declare war on Japan, and that day after the attack on Pearl Harbor, the United States of America was officially thrust into World War II.

Reflecting on the loss of human life and the ruination of the Pearl Harbor Base that day serves as a stark reminder of the exceptional service and selfless sacrifice of our armed servicemen and women, who risked their lives and personal safety to shield our nation from harm and preserve our nation’s founding values and liberties.

Today we pause in commemoration of those who fought and died on December 7, 1941, especially remembering Seaman Delmar Dale Sibley of Owego who is still aboard the USS Arizona, and we honor their bravery and final sacrifice.

We are profoundly grateful for members of our nation’s military and their families, who freely risk all for the good of others.

The Tioga County Legislature proclaims December 7, 2019 as PEARL HARBOR REMEMBRANCE DAY and throughout Tioga County encourages all to remember the exceptional service of our nations’ Veterans.