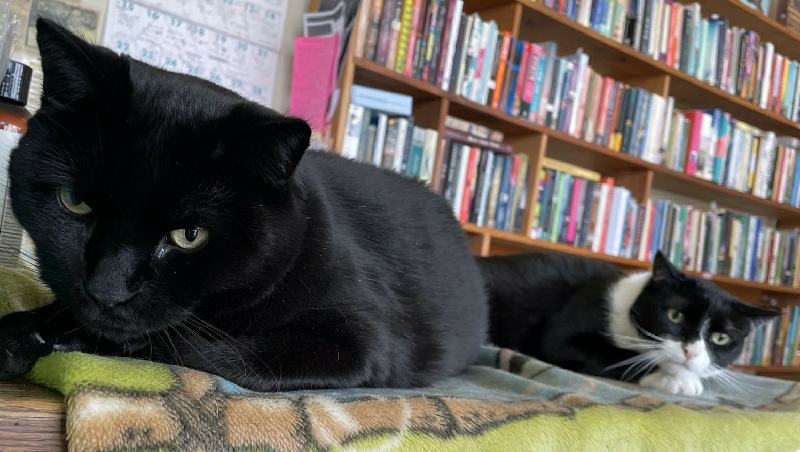 (Wellsboro, PA) – Two things happened sooner than book store Kevin Coolidge, of Wellsboro, expected. The author and owner of “From My Shelf Books and Gifts” at 7 East Avenue in Wellsboro, received a copy of “Catster Magazine” on Saturday, Sept. 17, featuring an article about bookstore cats — Huck and Finn — cats who call Coolidge’s bookstore home. “I was surprised because that issue had been released so soon,” said Coolidge.

Writers from “Catster Magazine” contacted Coolidge about a month ago for an story for the November/December 2022 issue. The article was on bookstores with cats, and the magazine wanted to include the felines at “From My Shelf Books.”

“They requested photos of Huck and Finn, as well as an image of their book, ‘Huck & Finn Bookstore Cats’,” Coolidge said. “Catster Magazine,” formerly known as Cat Fancy, is the most popular and the most widely distributed magazine about cats.

“The text in the article about Huck and Finn mentions their book and how it details a day in the life of the cats at the bookstore,” he said.

Huck and Finn share the article with six other cats. They are: Junie B. Jones at Cat Tales in Portland, Indiana; Dinah from the Dusty Bookshelf in Lawrence, Kansas; Emma from the Recycle Bookstore in San Jose, California; Tiny the Usurper at the Community Bookstore in Brooklyn, New York; and Apollo and Zeus at the Iliad Bookstore in North Hollywood, California.

This is the book that Coolidge struggled to finish for three years due to writer’s block. Thanks to a June 24 email from McKay Campbell, of Williamsport, telling the author he had finished reading his first book in the raccoon series and was going to read them all by himself, Coolidge began working again on his newest book and finished the crucial first draft on July 4.

The 10-year-old youngster has dyslexia, a learning disorder that had kept him from reading a book on his own. “When I found out how much McKay loved his first raccoon book and how much it had helped him, I was inspired to finally finish this one,” Coolidge said.

“I was told ‘The Totally Ninja Raccoons Discover the Lost World’ wouldn’t get to Wellsboro until Friday, Sept. 30 but copies of the book arrived on Monday, Sept. 19 and we began selling them,” said Coolidge.

For more information about the Catster article, the newly released ninja raccoon book or the series, call the bookstore at 570-724-5793 or stop in.