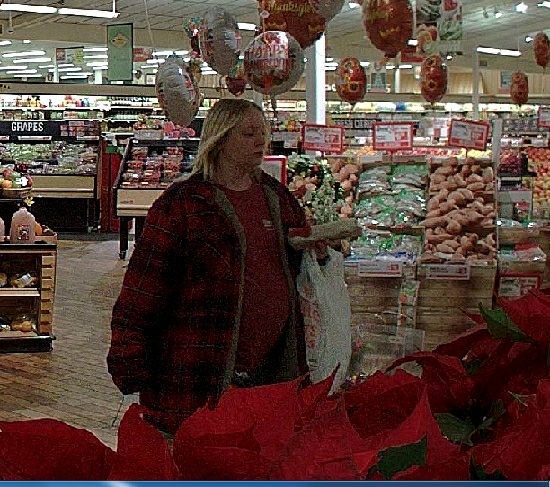 New York State Police at Endwell arrested Samantha A. Hilliker, 28, of Binghamton, on Friday and charged her with Criminal Possession of Stolen Property (Credit Card), a felony, for using a stolen credit card to purchase gift cards at Weis Markets in Endwell.

State Police received numerous tips after they issued a news release earlier this week with a surveillance photo of the woman walking out of Weis at roughly 9:25 p.m.on November 26. The photo was posted online at MyHometownToday.com and other media outlets in the Binghamton area, as police asked for the public’s help to identify the woman.

Police said Hilliker was arrested, processed and released on an appearance ticket returnable to the Town of Union court on January 7, 2019.

New York State Police have located the woman in this surveillance video who is accused of using a stolen credit card at a local grocery. Police say she used the stolen credit card at Weis Markets on Hooper Road in Endwell to purchase several Visa gift cards at the self-checkout on November 26 at approximately 9:25 p.m. In a news release Wednesday, state police thanked the public for their assistance in identifying and locating the woman, whose name was not released.

New York State Police at Endwell are asking for the public’s assistance in identifying the woman in this surveillance photo. She is accused of using a stolen credit card at Weis Markets on Hooper Road in Endwell to purchase several Visa gift cards at the self-checkout on November 26 at approximately 9:25 p.m.

The woman is described as a white female with blonde hair, wearing a plaid jacket and appears to be pregnant.  She was seen on camera leaving in a silver Subaru with a high wing spoiler, possibly a WRX.