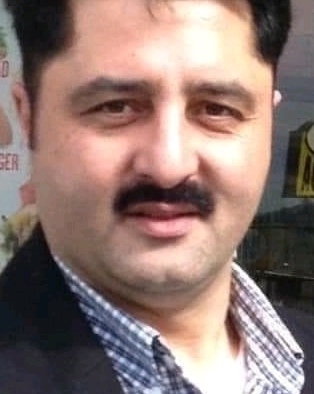 Johnson City Police Department on Tuesday morning identified Shakeel Khan, age 50 of Johnson City, as the victim in the Saturday shooting homicide near Grand Avenue and Riverside Drive. The investigation is still ongoing and there are no further updates at this time, according to police Chief Brett Dodge.

Islamic Organization of the Southern Tier has established a Go-Fund-Me account: As our beloved Br. Shakeel Khan was closing his restaurant, Halal Bites, in Johnson City, New York, he was shot and killed by a masked gunman. The killer of this heinous and unprovoked murder is still at large.

Everyone in the Greater Binghamton community has been shaken by the events that have unfolded but the ones affected most are his family for whom he was the sole breadwinner. He leaves behind a wife,  14 year old daughter Maria, and two sons, 12 year old Hasan, and 8 year old Temur. All three children attend the Vestal school district.

We are calling on everyone to help make things easier for them in these difficult days. Though no amount of money ever could heal the pain of the family or bring back the peace that was shattered, we hope to help them take care of their needs for the next few months as they struggle to live after their life has been turned upside down by this senseless act.

Johnson City Police Department is investigating a shooting homicide that occurred on Saturday, March 30 about 10:00 PM near the corner of Grand Avenue and Riverside Drive. A male victim was shot and later pronounced dead at Wilson Hospital. His identity is not being released at this time pending notification to all family members.

Detectives are looking for at least one male suspect of unknown race who was wearing dark clothing and a dark mask over his face.

Anyone with information about this case should contact Johnson City detectives at 607 729-9321.