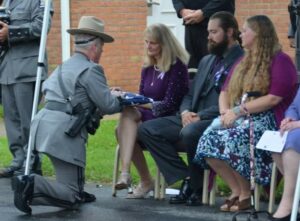 He served at “Ground Zero” for six months immediately following the 9/11 attack on the World Trade Center buildings in New York City. His daily exposure to toxins ultimately cost Brent his life, according to a news release from New York State Police.

Chomyszak attended Norwich High School where he was on the rifle team and became a master with long guns and pistols, according to his obituary. He earned a bachelor’s degree in political science from the State University College at Oswego.

He graduated from the New York State Police Academy in 1987. He was selected for several special assignments, including the NY Governor’s Protective Services Detail and Marine Patrol. In 2004, he was promoted to sergeant and station commander at State Police Morrisville.