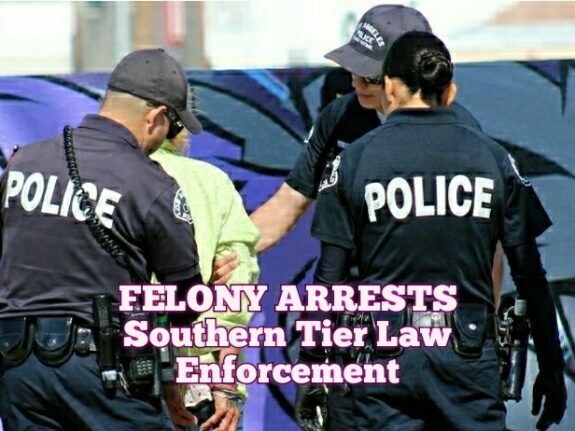 Owego police arrested Seth M. Nichols, 26, Town of Tioga, for Criminal Possession of a Weapon in the Third Degree (D Felony), Criminal Possession of Controlled Substance in the Seventh Degree (Misdemeanor), Aggravated Unlicensed Operation in the Second Degree (Misdemeanor) and Improper Signal (Violation) following a traffic stop. Nichols was turned over to Tioga County sheriff’s custody for arraignment at Tioga County Centralized Arraignment Court.
Broome County sheriff’s deputies arrested Matthew McCloe, 37 of Endicott, who was wanted by the Sheriff’s Office and Pennsylvania State Police for charges stemming from a vehicle pursuit on August 31, 2022. Deputies learned of McCloe’s whereabouts and initiated a surveillance when he was observed and identified exiting his vehicle. Police took him into custody without incident and minimal risk to public safety. McCloe was charged with:
On August 2, 2022, at 12:52 a.m., New York State Police at Endwell arrested Joshua J. Mizell, 34 of Endicott, for the Class E felony of Aggravated Driving While Intoxicated (with a child as passenger). Troopers were dispatched to a domestic dispute on Lyndal Drive that Mizell was attempting to leave, intoxicated with a child in his vehicle. Troopers stopped him and observed characteristics associated with impairment. Mizell was arrested and the child was turned over to a sober third party.

On August 6, 2022, at 11:42 p.m., New York State Police at Endwell arrested Vincent L. Depofi, 31 of Endicott, for the felony of Driving While Intoxicated (with a previous conviction within 10 years). Troopers were dispatched to several complaints of an erratic driver on Watson Boulevard near Traditions at the Glen, where his vehicle had left the road and he was unconscious. A trooper awoke the driver and observed characteristics associated with impairment. Depofi was arrested and taken to State Police Endwell where his reportable B.A.C was .11 percent.

On August 19, 2022, at 8:42 p.m., New York State Police at Binghamton arrested Pamela M. Fox, 53 of Binghamton, for the felony of Aggravated Unlicensed Operation in the first degree. Troopers were dispatched to a crash on State Route 11 in Kirkwood where they observed Fox with characteristics associated with alcohol impairment. Fox was arrested and transported to State Police Binghamton with a reportable B.A.C. of .17 percent.

On August 27, 2022, at 1:13 a.m., New York State Police at Endwell arrested Ryan M. McKinney, 36 of Endicott, for the felonies of Aggravated Driving While Intoxicated (with a previous conviction within 10 years) and Aggravated Unlicensed Operation in the first degree. Troopers on East Main Street in the Town of Union stopped a vehicle with no operating headlights or tail-lights. Troopers observed characteristics associated with alcohol impairment. McKinney was arrested and taken to State Police Endwell with a reportable B.A.C of .25 percent.