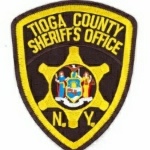 From the Tioga County Sheriff’s Office: On 03/13/2019 at 9:50 AM, the Tioga County Sheriff’s Office responded to a two-vehicle personal injury motor vehicle collision on State Route 17 westbound near exit 63 in the Town of Nichols. A New York State Department of Transportation (D.O.T.) crew was doing safety work on the highway when a D.O.T. vehicle was struck by a tractor trailer passing the work crew. As a result of the collision, the driver of the D.O.T. vehicle sustained serious injury and was transported by helicopter to Robert Packer Hospital in Sayre, Pennsylvania.

The driver of the tractor trailer, Lawrence E. Faucett, age 37, of Ulster, Pennsylvania, was issued traffic tickets for Moving from Lane Unsafely and Failure to Exercise Due Care (Move Over Law).
The tickets are returnable for the Town of Nichols Court on April 4th at 10:00 AM. Faucett and the driver of the D.O.T. vehicle were the only people involved in the collision.