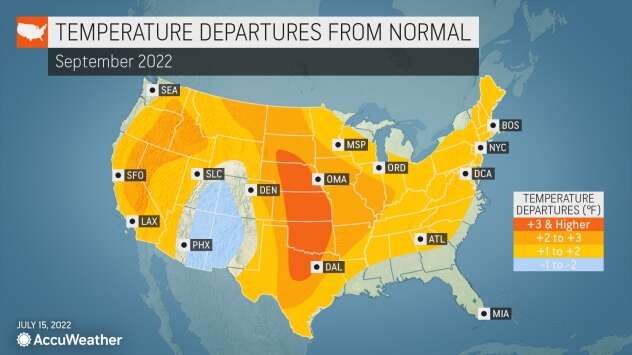 By ACCU-WEATHER – It has been a hot summer across the U.S. with the temperature frequently flirting with the 100-degree mark in countless locations and some of the longest-duration heatwaves in a decade. However, there is a light at the end of the tunnel for those awaiting the return of hoodie weather, pumpkin-flavored beverages and even snow.

As the calendar flips from summer to fall, residents in the Southern Tier of New York and the Northern Tier of Pennsylvania might not feel much of a change. The warmer-than-normal pattern is expected to continue into early autumn.

For those looking forward to enjoying autumnal scenery, the widespread warmth could delay the peak of fall foliage in popular viewing areas. But, Accu-Weather forecasters say the wait could be worth it year as vibrant colors are likely to unfold on the hillsides across most of the Twin Tiers and the Northeast.

AccuWeather long-range forecasters believe an increase in moisture will help to promote rain across the Northeast, hopefully helping to wash away drought concerns, but the rain will be a double-edged sword. Some of the rain may come from a named tropical system.

Last year, multiple tropical systems had significant impacts in the Northeast, including Hurricane Ida, which caused unprecedented flooding in the New York and led to dozens of deaths as a tropical rainstorm. This year is also the 10-year anniversary of Superstorm Sandy and another direct strike from a hurricane is not completely out of the question in the Northeast.

The first frost of the season could arrive one or two weeks earlier than normal across upstate New York, which translates to late September and early October. However, the early frost outlook does not pose a serious threat to agriculture during the autumn harvest.

A stormy pattern could then set up over the Northeast in late October into November, including the chance for the first snowflakes of the season across the interior Northeast and higher elevations of the Appalachians.