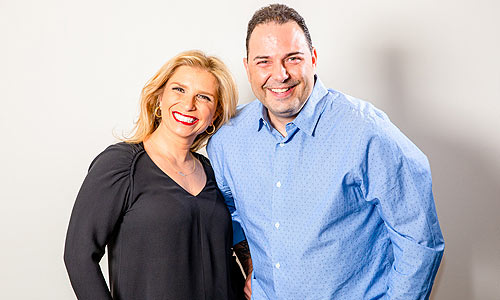 ABOUT ANNA ZAP
She is a former adjunct professor of Public Speaking at Pace University. With roots in stand-up comedy, Anna has performed at most of Manhattan’s most prestigious comedy clubs including Caroline’s on Broadway, Gotham Comedy Club, and Stand Up NY. (Take that SATs!)

In 2010 she discovered radio via Craigslist and worked terrible hours and horrible shifts to eventually wind up with her own show!

Her biggest passion, besides naps and eating pizza, is doing all she can to help raise awareness and funds for charities that are close to her heart. She is most proud of the hundreds of thousands of dollars she helped raise to support charities such as Make-A-Wish, The American Cancer Society, and many more. She recently was a keynote speaker for LiveGirl, which empowers young women to learn their voice and gain confidence. Anna was proud to have shared the stage with Olympic Gold Medalist Aly Raisman this past year as they discussed the impact of sexual and domestic abuse for The Center for Family Justice.

Anna spends a great deal of time Googling things like “Why can’t I cook?” or “How do you operate on no sleep when you have an infant?” In her spare time, you can find her on a dance floor leading a Zumba class while her ten-year-old, Hayden, looks on horrified. Her youngest daughter, Dakota, just turned one and has decided that sleep is overrated.

Anna counts herself lucky to be married to her college sweetheart who (thankfully) is an organized, neat freak so that Anna can have some kind of order in her life. Together they are balancing work and family in a state of sleep-deprived lunacy.

ABOUT RAVEN
If you’ve spent any time listening to the radio the last twenty-five years you’ve probably heard Raven.

He started at nineteen and worked all hours of the day and night. Oh, and he also dealt cards in Vegas, poured concrete in Mass., and had a bit too much fun in Cancun.

Raven is married and you can hear his wife every Friday grading his husbandry for the week. He loves animals and does anything he can to help rescue dogs.

He’s handy around the house but also resistant to taking down the holiday lights until Memorial Day. He remains deeply resentful of his parents for giving him a birthday so close to Christmas and ripping him out of good gifts his entire existence.

Raven also knows more about pop culture than any person should — and is seldom humble about it during “Can’t Beat Raven,” mornings at 8a.

While he and Anna certainly argue, and sometimes even storm out of the room, Raven loves working with her and is excited to be on with his radio partner in crime.