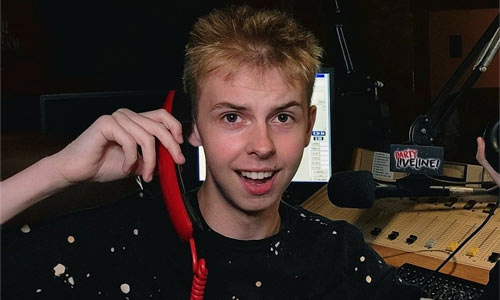 About Party Liveline with Mason

Born in Green Bay and raised in Appleton, Wisconsin, from a very young age Mason had a unique connection to music -- literally memorizing lyrics to all of the new songs, being exposed to (and enjoying) all different genres of music, and waking up every Saturday morning to watch the VH1 Top 20 Video Countdown.

In 2010, Mason's whole life changed when his family moved to Rhinelander, a small town in northern Wisconsin where everything was different… with fewer people, less entertainment, and the loss of all of the relationships Mason formed in his hometown. All Mason had was school, family, and a radio.

With limited access to the internet at home, and spending most of his time on his own, Mason quickly discovered 95.5 WIFC, the only Top 40 station within 100 miles of the area. He became a heavy listener, calling the jocks, and using his huge collection of "Now That's What I Call Music!" CDs practicing talking up song intros, mixing music, and playing pretend-radio for an audience only of himself.

One Saturday night, while driving in the car with his family, Mason asked his parents to put WIFC on, and what he heard for the first time was Open House Party. He had no idea what "OHP" was, why it was on the station, or how "Kelly from Kansas City " was listening and calling into a station in the middle of Nowhere, Wisconsin to request a song. But the show sounded big, real, and NOW. When a commercial break came on, Mason's parents switched the station and he begged for them to turn it back on. As soon as the family arrived home, Mason spent the rest of the night in his room listening to Open House Party, and from there, he became addicted.

For quite some time, he had no idea OHP was a national show. Once Mason discovered the show, and although it sounds cheesy and unrealistic, it changed his whole perception of life. By 2013, he was completely hooked on OHP. From calling into the show to requesting songs and getting on the air, recording bits from OHP, and uploading them to YouTube, he never missed a single show no matter the conflicting event in his family’s life (and if he did, it was a bad day for whoever was responsible for it… usually his parents, who thought it was ridiculous that their 12-year-old son shut out the rest of the world and listened to a 5-hour radio show every weekend).

Mason had no idea how exciting radio could be until he heard John Garabedian. Local radio stations were always boring, predictable, and pushing things he didn’t care about like "go to our website" or “listen to our morning show”. There was no connection to the real world, no life, or anything exciting that made listeners want to stay tuned. Open House Party was the complete opposite of every station it was on. It was alive, real, and exciting, and it made the listener feel like they were part of something big. To Mason, the rest of radio was like a dull, droning machine 6 nights a week. Then on Saturday night it came alive and transformed the weekend wasteland… the LIVE Open House Party!

Driven on 100% listener requests, contests, superstar interviews, hot remixes, a real studio audience, bone-chilling production, people calling in from all over the world, and a real sense of place and time. OHP was the soundtrack to your weekend, and Garabedian literally controlled the audience with every word he spoke, every song he played. Every emotion he felt, you felt too. Not only was the show spectacular, fun, and energizing on its own, it was BETTER than anything on any radio station ever. Mason was inspired!

It didn't take long for Mason to realize that this is what he wanted to do for the rest of his life.

This led to him announcing high school sporting events, DJing dances, reading the morning announcements, and even doing small production work for Open House Party, all while in middle school. This went on for a few years until Mason moved back to Appleton, WI when his father got his old job back and he started high school. Mason was thrilled to be back where his whole life started, with the rest of his family and the surroundings he knew best, but if it weren't for his father getting that new job and moving the family to Rhinelander, a rural, lonely place where Mason had no desire to be, it's likely he would've never discovered Open House Party.

While in high school, Mason got his first on-air job at the local Top 40 B104/WBJZ-FM, followed by a job working for Extreme Entertainment, the largest entertainment company in Wisconsin. He spent nearly every weekend DJing and MCing two to three weddings. The experience dealing with a live audience was invaluable, and the money was outstanding.

When B104 got sold, and everyone lost their jobs, Mason started his own internet Top 40 radio station, Vibes Online. He was the only employee and handled everything from graphics, music scheduling, social media, and of course, a live 5-hour radio show every Sunday night (because he couldn't miss OHP on Saturday) with many of the nuances and features that made OHP so popular. Mason's audience grew, eventually attracting a hefty worldwide audience, and featured artist interviews and even paid advertisements. He again DJed school dances, district-wide parties, and announced basketball games for a year, all while still listening to Open House Party every Saturday night.

In October 2016, John Garabedian announced his departure from OHP effective at the end of January 2017. Mason and John had been talking for some time, and John knew Mason's love for the show and passion for broadcasting. So John invited Mason to come to the second-to-last Open House Party, where his passion for radio started. Ironically enough it became his first time ever on national radio (aside from calling in requests), doing a bit with John and reading a Geico Insurance ad (which he still has memorized). John's final show was the following week, and it was up to Mason to find something new to take up his time.

He had kept in touch with John all through high school, and several months after graduation looking for radio job opportunities, he moved to Boston where there would be more opportunities. Mason applied to over 20 radio stations, but in the midst of radio’s massive layoffs and the Coronavirus pandemic, he ultimately had no job offers.

Meanwhile, Top 40 station manager Steve McVie from Y101 Cape Cod (WHYA) had heard Mason on-air live previously on Vibes Online. Impressed by Mason's raw talent, charisma, and potential, Steve knew he needed to get this guy on the air and started off by handing over weekend nights. Mason voice tracked from the former Open House studio in Boston. The listener's response was immediate and positive. After the initial weeks blowing Steve away with all the ingredients from John Garabedian's live OHP, he wanted to get Mason on weeknights.

As this unfolded, COVID had become a pandemic. Businesses were shut, streets were empty, and advertising schedules were canceled. As a result radio’s revenues were decimated. Mass staff cutbacks and furloughs became epidemic throughout the radio industry. Key air personnel were let go everywhere, replaced by boring voice tracks or even unhosted music.

Having programmed national Top 40 radio successfully for 30 years, John Garabedian has more experience successfully programming national Top 40 radio than any other person. He quickly recognized that Top 40 stations everywhere needed exciting, compelling, live night programming to generate ratings and to revitalize radio’s fading listenership among young adults. It was obvious to him that this was a one-way journey, and that post-pandemic that music radio would never return to the old way of doing things. After 30 years of success with live national interactive party programming, John was energized by the challenge and thus created the concept and design of Party Liveline for national syndication. He knew that eventually spectacular live national programming would replace and outperform generic, canned voicetracks.

But where could he find a charismatic host tuned in to today’s online lifestyle, who understood the nuances of a fast-moving, music-intensive Top 40 show with fun content and intense audience interactivity? It would have to be someone young and fresh, who had studied and understood the informatics and spirit of John’s previous Open House Party, and was passionate and dedicated to delivering the goods. Who but Mason Kelter!

As a millennial, Mason is directly tuned in to the 21st-century lifestyle of today’s young adults. After studying John Garabedian’s Open House Party for a decade, he understands and has developed the skills and sophisticated techniques to build an enthusiastic, responsive, interactive listener base of fans, not just listeners.

"Liveline" debuted in May 2020 and quickly built a following with loyal listeners, using heavy audience interaction, tight production, contests, features, guest artist interviews, and a sense of what's going on NOW! These were all things that made Open House Party so successful which Mason loved, memorized, practiced, and shared with the listeners. The loose, laid-back, "anything can happen" fun environment of radio is what Mason loved about radio, but could never find anywhere after John left the show. It was up to him to bring it back, carry on the legacy, and give listeners an outlet to express themselves, party together, and be connected to a "larger than life" experience.

People growing up in Mason’s generation have turned to other sources for music and entertainment, like YouTube, Spotify, and on-demand television, not because there's more to discover and personalization, but simply because radio doesn't offer anything for them to like.

Radio is not the second or third choice for someone who wants to hear music, especially with constant commercials, and boring canned DJs talking about nothing. Top 40 radio today gives you nothing to love about it.

But radio should be the place for listeners to connect with each other, feel connected to life, be entertained, hear the biggest hits, laugh, and be constantly connected with what's going on. Party Liveline is designed using proven, successful techniques to build a community of loyal fans, not just listeners.

It is John Garabedian's sign off quote, "Be Your Dream," which inspired Mason to do just that