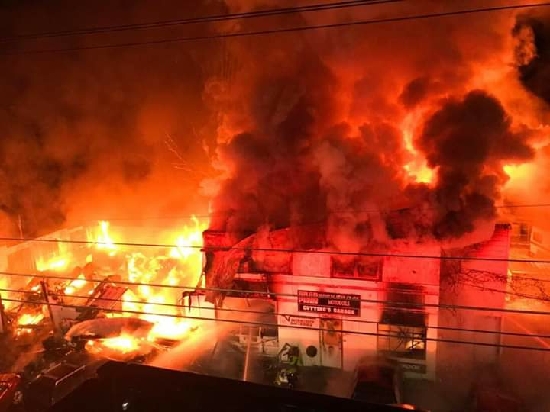 Chief Mike Hall, of the Dryden Fire Department, said an alarm was received at 3:27 a.m. Wednesday, Dryden Fire and Ambulance along with automatic mutual aid was dispatched to 1834 Dryden Road (NYS Route 13) in the Town of Dryden, near Ithacs, for a report of smoke in the multi-use structure (vehicle repair shop and apartment). While responding Dryden Chief Officers were notified of law enforcement on scene reporting fire showing from the structure. A second alarm assignment was requested bringing additional mutual aid to the scene. Dryden Fire Department volunteers arrived on the scene within 12 minutes after the initial dispatch to find the structure heavily involved in fire.

At approximately 5:20 a.m., the fire was declared under control, however the building was a complete loss. Firefighting efforts were hampered by single-digit temperatures and no water supply nearby, a water shuttle was established bringing water to the scene from approximately 3 miles away. The occupants of the apartment were able to evacuate the structure and were uninjured. The cause of the fire is still under investigation at this time.

Members of the Dryden Fire Department would like to thank all the mutual aid departments that assisted on scene, as well as several members of the community that provided refreshments for the volunteer firefighters that responded.