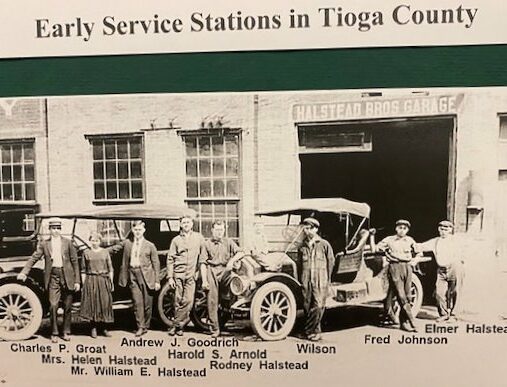 Owego, N.Y. — A winning Owego Soap Box derby car that competed in the 1968 national competition in Ohio.  A Waverly boy who grew up to form a vehicle manufacturing company. An Owego business that in the early 1900s built electric trucks long before today’s demand for electric vehicles. The automotive history in Tioga County is vast and is the focus of the latest exhibit inside the Tioga County Historical Society Museum.

“The Automobile in Tioga County: More Than Just a Ride,” is now open and runs from 10:00 a.m. to 4:00 p.m., Tuesdays through Saturdays, through Sept. 30, at the museum, 110 Front St., Owego. The display chronicles the story of autos, auto makers, race car drivers, and toy cars all from Tioga County with many artifacts and photos. Included is a historical perspective on car dealers, service stations, licensing, and advertising, world famous drivers racing at the Tioga County fair grounds, and NASCAR drivers’ early beginnings.

Check out the soap box derby car driven by Bill Terry, who won the 1968 Owego Soap Box Derby race sponsored by the Owego Jaycees, Bill Graham and Trabucco Chevrolet, and then went on to race in the All-American Soap Box Derby in Akron, Ohio. Go back much further in time to see how the Champion Wagon Company of Owego appeared to be ahead of its time building electric trucks around 1909. And while Ford and Chevrolet stand out today as highly recognizable brands, George Pierce, who was raised and educated in Waverly, N.Y., built in the early 1900’s his Pierce-Arrow Motor Car Company to include a vehicle that came to be known as the “American Rolls Royce,” the Pierce-Arrow. Additionally, on display is one of the very few and rare 1913 Monarch motorcycles with belt drive and magneto ignition. These are just examples of the many items visitors will see in the exhibit.