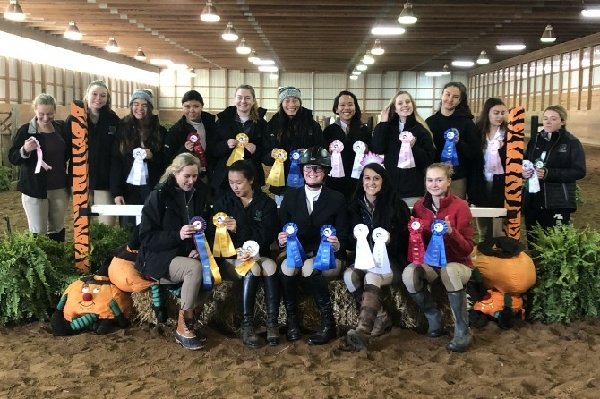 Among the many prominent sporting teams boasted by the Binghamton area, one team of college students has earned the title of ‘Top Team’ in Intercollege Equestrian Zone 2 Region 1 this past academic year.

The Binghamton University Equestrian Club has seen a significant increase in interest and membership in recent years. Under the guidance of Coach Mimi Penfield Morgan, who has helmed the team for the past 7 years, Binghamton’s equestrian team has scored spots in many competitions, including Regionals, Zones and Nationals.

Penfield, a lifetime equestrian trained by the elite, was initially encouraged to take leadership of the team by students on the team’s board. In signing on as coach, Penfield also contributed her Binghamton-based Cold Spring Farm equestrian barn as the team’s home base of operations. Cold Spring Farm is a family-run riding center specializing in hunters and jumpers, offering the team both indoor and outdoor riding arenas, as well as the use of more than 10 horses.

Recently, the Binghamton University Equestrian Club was recognized by the Intercollegiate Horse Show Association (IHSA) as the top team in its region. Cold Spring Farm’s well-trained horses and indoor and outdoor riding arenas aided in achieving this prestigious accomplishment.

Unlike a varsity team, most of the financial burden of riding is handled by the club’s riders, seeing as club organizations are not eligible for scholarships that otherwise would pay for lesson and competition fees. While the university does contribute some funding for the team, the cost of caring for and housing competition-quality horses is a steep expense primarily handled by Penfield and the team’s riders.

As for team organization, in addition to being full-time students, administrative work and organizational tasks like scheduling lesson times, carpooling student athletes from campus to the barn, and entering competitions falls on the shoulders of the team’s captains. Despite these challenges, Binghamton’s equestrian team competes against 10 other teams in the region, including the varsity teams at Cornell and Alfred. Additionally, Binghamton riders do not ride their own horses during competitions. Instead, they are randomly assigned horses to compete with right before they step in the ring, so their skill must translate on any horse in order to rank so competitively.

Most recently, the IHSA has cancelled all post-season horse shows, including the two most prominent events, Zones and Nationals, due to COVID-19 concerns. The university was forced to end all sports seasons early, but the team looks forward to a successful 2020-2021 season when the fall semester begins.