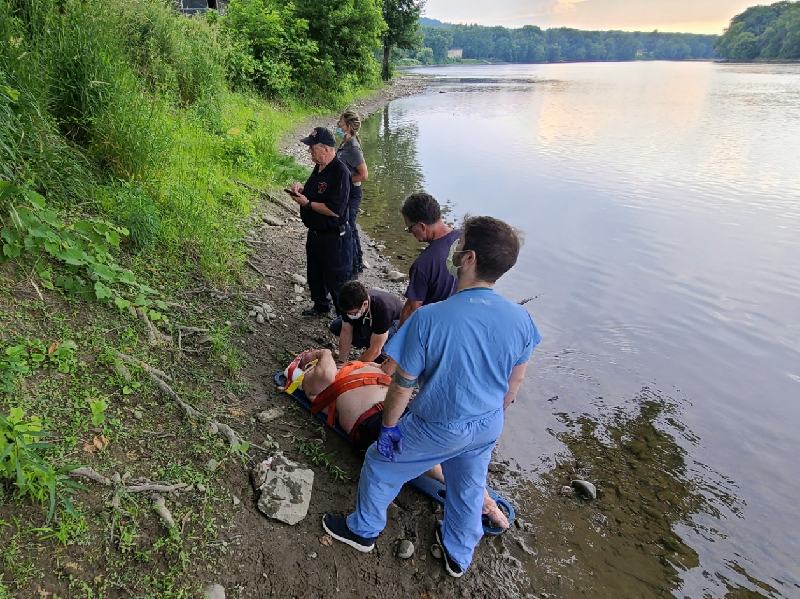 On 06/22/22, about 7:16 AM, Village of Owego Police were dispatched to Front St. at Church St. on the Riverwalk to Aid Owego EMS for a male that fell on the river rocks into the river. While en-route, Tioga County Sheriff’s Office dispatch advised that the male was still in the water.

Upon arriving on scene, Owego Officer’s learned that the 55 year old male from Corning arrived at the Riverwalk with his friend to fish in the river. As the two males were walking down the river boulders, the 55 year old male, lost his footing and fell head first down the boulder rocks and into the river. Upon hitting the water the males head was under water and his feet were still on the last boulder on the river’s edge. His friend was able to keep his head above water until he got some footing underneath him. His friend called 911 for help and then lead Owego Police Officer to the incident location.

Officer stood by with the male until Owego EMS and Apalachin EMS arrived and began to provide first aid. Owego Fire Department was summoned to provide additional help to remove the injured male from the river bank. The male was placed into a rescue basket where Owego EMS, Fire and Police with Apalachin EMS were able to pull him onto the bank where he was carried to Ahwaga Park, where he was placed onto a gurney and into the ambulance. About 8:10 AM the male was transported to the Hospital for further treatment.

The Owego Police Department would like to commend the Owego EMS, Owego Fire Department and Apalachin EMS for their excellent skills and first aid efforts in this difficult environment.