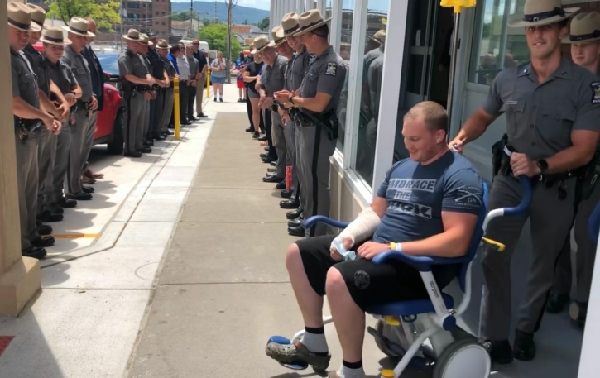 New York State Police Trooper Ryan Thorp was released wednesday from UHS Wilson Medical Center in Johnson City, where he was treated after getting shot last week whe he responded to a domestic dispute in Deposit. Throp will continue care at home. The full video of his release is posted on the New York State Police Facebook page.

Scott A. Mawhiney, age 44 of Deposit, NY, was arraigned Thursday morning at Broome County Central Arraignment and Processing on the felony charge of Attempted Murder in the first degree. Mawhiney was remanded to the Broome County jail on no bail.

Trooper Ryan Thorp, who is assigned to State Police at  Deposit, sustained injuries to his arm when he was shot while responding to a report of a domestic dispute at Sunrise Terrace in Deposit. He was transported by ambulance to UHS Wilson Medical Center in Johnson City. He underwent surgery in the overnight hours and is currently in stable condition. Trooper Thorp has been a member of the New York State Police for three years.

The investigation is continuing.

On June 23, 2021, shortly after 9:00 p.m., New York State Police at Deposit responded to a reported domestic dispute on Sunrise Terrace in the Village of Deposit. A trooper was shot. The trooper was transported by ambulance to UHS Wilson Memorial Hospital.

A suspect was taken into custody. There is no threat to the public. More information will be released when it is available.