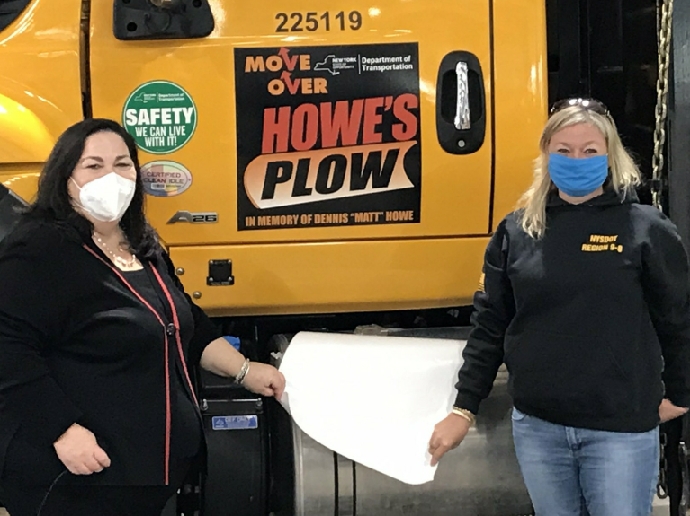 (Owego, NY) – New York State Department of Transportation Commissioner Marie Therese Dominguez has christened “Howe’s Plow” as the winner of DOT’s first “Name a Plow” contest, which has held at last summer’s New York State Fair. The winning name is a tribute to Dennis “Matt” Howe, a highway maintenance worker from Owego who was killed in a work zone by a distracted tractor trailer driver. This snow and ice season, Matt will be honored across the state as one plow truck in each NYSDOT region will bear the name “Howe’s Plow.”

Matt Howe was killed in a #WorkZone by a driver who failed to #MoveOver. @MarieThereseNY and Matt’s widow Alycia unveiled a ceremonial Howe’s Plow today to remind drivers to slow down for construction vehicles and give them plenty of space when plowing. @fredakshar pic.twitter.com/YBzUSTkDmU

Howe was struck and killed while his maintenance vehicle was parked on the shoulder of Route 17 in the Town of Nichols in March 2019 with lights flashing, alerting motorists to a road repair crew down the road. A tractor trailer driver, who failed to comply with New York State’s Move Over law, drove his truck onto the shoulder and crashed into Matt’s truck. A jury later convicted professional driver Lawrence Faucett of Ulster, PA, of criminally negligent homicide.

A section of State Route 17 where the accident occurred has been renamed as the “Dennis ‘Matt’ Howe Memorial Highway” to memorialize and honor Matt. “Matt Howe was loved and respected by so many across our community and across the NYSDOT family of men and women dedicated to making our roads safe,” said Sen. Fred Akshar, of the 52nd District that includes Tioga County. “While nothing can undo this tragedy, today we come together as a community and ensure that Matt’s memory and legacy remains a part of our community and serves as a reminder to all to take extra care on our roads and highways to prevent future tragedies from taking place.”

Commissioner Dominguez and all the women and men of DOT have made work zone safety a priority, working closely with law enforcement to educate drivers and encourage them to slow down and move over when approaching work zones, and crack down on those who don’t.

New York’s Move Over Law was enacted in 2011 to protect New Yorkers working along roadways and has since been expanded to include a wide range of emergency and hazard vehicles, such as tow trucks, construction vehicles, highway maintenance vehicles, police vehicles, fire trucks, and ambulances. The law applies to both sides of the road – not just the shoulder on the right – and includes vehicles with flashing blue, green, red, white, or amber lights, giving law enforcement more authority to penalize violators who jeopardize the safety of those working along highways.

The Name a Plow contest will be expanded in 2022, with a plow in each region of the state receiving an honorary name. The public across the state will be able to vote and voting will be marketed via the Department’s social media channels.