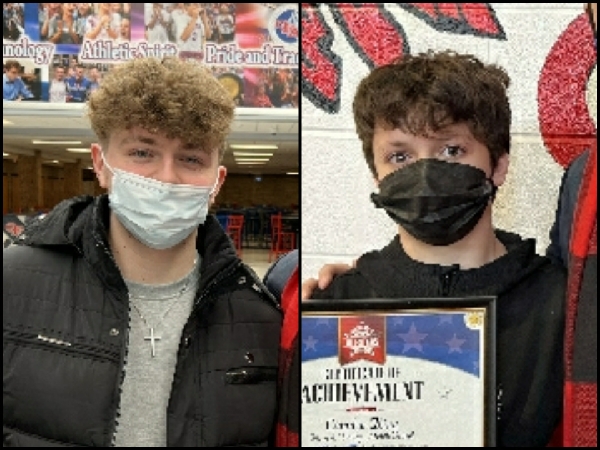 Each year, Akshar recognizes students selected by their school districts in the 52nd Senate District who have shown great leadership, compassion, school spirit or improvement among their peers.

At Owego Free Academy High School, Sen. Akshar recognized senior student Aidan Both. Aidan’s school administrators describe him as a true leader at Owego Apalachin, where Both serves as Senior Class Vice-President and a member of the National Honor Society. An energetic, positive-dedicated and hardworking person, Aiden leads by example in the halls of the high school and on the athletic field, and is always willing to learn and grow as a young adult. 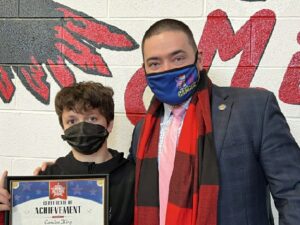 From Newark Valley Middle School, Sen. Akshar recognized 7th grade student Camden King. Camden’s school administrators describe him as one of the sweetest, kind-hearted kids who is always willing to offer a helping hand, even before he is asked to help. In middle school classrooms, he is one of the first students to say “Hello” and one of the last to say, “Have a good night.” Newark Valley Middle School says Camden is a glimmer of hope in a crazy time and makes everyone he meets smile with him.

At Jennie F Snapp Middle School, Akshar recognized 8th grader Andre Williams for his impressive dedication to both his studies as he has on the playing field. His teachers describe him as a hardworking natural leader who is an absolute pleasure to have in class. His coaches remarked on how extremely coachable Andre is and how he always plays with respect for others. Andre leads by example and is a role model to his peers, surrounding himself with those who he can lift up and he’s shown to be a truly positive influence on the Jennie F. Snapp family. The Union-Endicott administration says Andre is “a kind and charismatic young man, and we are looking forward to seeing where his future takes him and how he will continue to lead others both on and off the field.”

Since starting the program, Akshar has recognized over 80 students across school districts in Broome, Tioga, Chenango and Delaware counties.

Akshar said, “It’s truly a unique experience to be able to shine a light on some of the amazing work and service that’s being done by young people in our community. Whether they’re spending their valuable time with younger students who need a friend or providing support and leadership to their fellow classmates, it’s important to recognize these bright stars and let their stories be told. In a time when the nation seems so divided, I’m happy to support such a great recognition program that shows the best in our young people.”