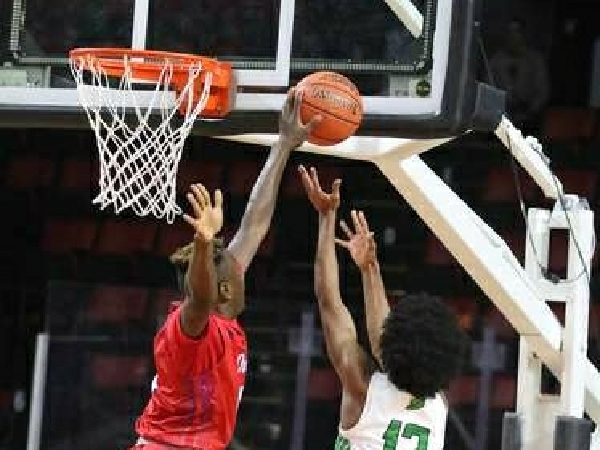 The Saints knocked down three threes in the first quarter to put Owego in a 16-7 hole, then drained five more in the second period to build a 37-20 cushion. They added another trio of treys in the fourth.

“It’s hard to compete with them,” Owego coach Chris Evans said. “They were farther than the 3-point line too. Tried to run them off the 3-point line, they just took more steps out and made shots. It’s hard. Obviously they have a lot of shooters and they’re very, very well-coached.

“Everybody knows that coach Chris Sinicki is a fantastic coach. What I think he’s done a great job of is he’s meshed, almost like an AAU team, he’s meshed them together very, very well this year, and they’re tough. They’re really, really tough. He’s got kids from a lot of different districts and he’s been able to bring those kids together and make a really good team kind of atmosphere. They’re tough to guard, tough to handle.”

The Indians’ defense, their strength throughout the season, held Seton to eight third-quarter points, but was unable to gain any ground, scoring just eight points as well.

Erickson sandwiched three free throws between treys by Bucko and himself to give Seton a 9-5 advantage in the game’s first three minutes. Erickson then fed Kaelin Thomas following a steal for a lay-up to make it 11-5 and Erickson closed out the period with a buzzer-beating three.

John Bangel accounted for all seven of Owego’s points, including one trey and a long jump shot from just inside the arc.

Bucko canned back-to-back threes to make it 22-7 early in the second stanza, then John Larter gave Owego a trey and a pair of free throws, but Erickson nailed another three and Thomas added a basket to make it 27-12.

Brad Palmer put in a bucket for Owego, then Drew Tavelli added a steal and lay-up to cut the lead to 22-16, Bucko and Tait Christensen wrapped three-balls around a pair of Max Bergman field goals as Seton took a 37-20 halftime lead.

Thomas notched two baskets and Jaden Short added another as the Saints stretched their advantage to 43-20 in the first three minutes of the third quarter.

Tavelli would squeeze a basket between John Bangel’s dunk and pair of free throws to make it 43-26, then Erickson and Joe Bangel swapped two free throw points each and the game headed into the final eight minutes with Seton leading, 45-28.

Erickson nailed two treys and Bucko added another, all coming in the first three minutes of the final frame, to make it a 54-30 contest.

John Bangel recorded a pair of free throws and a basket in the fourth quarter to finish with 19 points. Tavelli added a foul shot and ended with five points. Larter contributed five as well, and Joe Bangel and Palmer added two apiece.

Erickson had a game-high 20 markers, Bucko added 15 and Thomas tacked on 10.

Seton (19-2) receives a first-round bye in the stet tournament, then hosts Section III champ Chittenango at the arena next Sunday.

Owego finished the season with a 12-10 record and Evans looks for them to be competitive again next season.

“I told them that I honestly think that we were the best Class B team here and Seton again should not be in Class B, but if they are then we’ve got to play them and,” he said. “It was a heck of a year. They were tough to compete against.

“We have a ton of juniors and we’ve got some young JV kids who are here and we’re only going to get better.”

To the seniors Evans offers a heartfelt “thank you” for their dedication to the program.

“Their tenacity and the fact that they just gave and gave and gave, not just to the team, but to the whole program,” he said. “We do clinics for little kids and they’re there. Just through the years, their commitment and effort — a lot of stuff behind the scenes, a lot of people don’t recognize — and that’s what keeps the program going and growing, so I say, thank you.”