(Vestal, NY) – Binghamton University freshman forward Genevieve Coleman, a graduate of Owego Free Academy, has been named women’s basketball America East Rookie of the Week. It marks the second time this season that she has earned the conference’s weekly accolade. 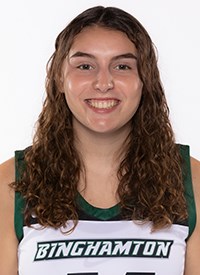 Against America East first-place NJIT on Saturday, Coleman finished with 12 points, six rebounds and a pair of assists in 25 minutes off the bench. In the process, she went 5-for-8 from the field, including 2-for-3 from beyond the three-point arc.

Through the first 11 games this season, Coleman has averaged 6.5 points and 3.8 rebounds. She has reached double figures in scoring three times.

Coleman was previously named the America East Rookie of the Week on Nov. 15. She is the first Binghamton player to earn the award twice since Rebecca Carmody during the 2015-16 season.

At Owego Free Academy, Coleman was:

The Bearcats have had two freshmen earn the America East Rookie of the Week award this season. Freshman guard Ella Wanzer was the pick on Nov. 29.

– Story and photo from bubearcats.com