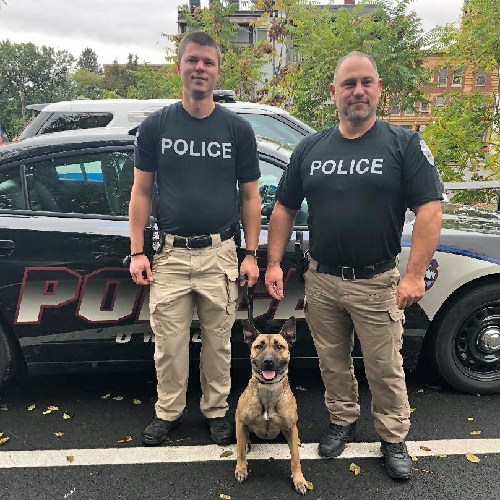 Owego Village Police Department is proud to announce the newest member of our department, K-9 Mag. K-9 Mag is believed to be a three-year-old, Pitbull/Belgian Malinois mix. She is fully trained in narcotics detection and tracking.

Upon completion of her training, the Southern Tier Police Canine Association generously donated K-9 Mag to the Owego Police Department They also donated $6,000 worth of equipment to outfit her patrol vehicle and ensure she has the basic equipment needed to safely serve our Village. A fully trained canine like Mag would normally cost around $10,000. With the assistance of the Southern Tier Police Canine Associations’ Homeless to Hero program we were able to add a valuable member to our department without costing The Village the $16,000 it would have typically taken to add a canine.

K-9 Mag and her handler, Officer Andrew Pike will now undergo an in house basic handler school and be out on the road serving the Village of Owego shortly.