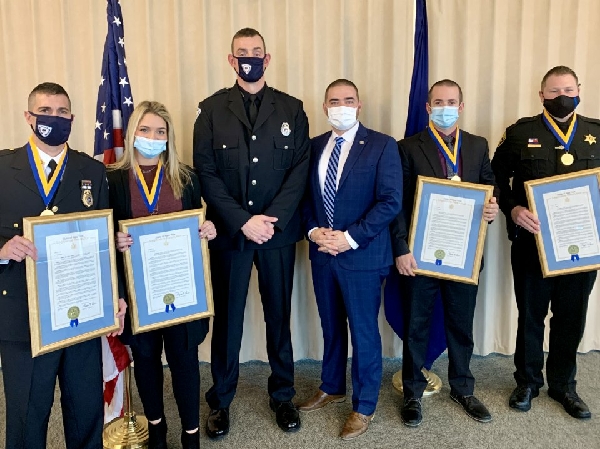 Sen. Fred Akshar (R-52nd District) was joined by Binghamton Mayor Rich David and officials from the Binghamton Police Department and the sheriff’s offices from both Broome and Tioga counties to recognize four individuals for their quick action in saving the life of a law enforcement officer last year.

That day, Barcak, Schoonover and Pavelski were working as instructors on the property of the old Binghamton Psychiatric Hospital for the Officer Survival for Zone 6 Police Academy recruit training. As the instructors were finishing the day’s training, Officer Kaczynski began to exhibit signs of a medical emergency, including light-headedness and disorientation.

The instructors leapt into action and quickly loaded Kaczynski into Barcak’s vehicle and drove him to meet with emergency medical personnel, but during the short drive, Kaczynski stopped breathing.

Upon reaching the bottom of the hill, Barcak provided rescue breaths and CPR until emergency medical personnel arrived. Kaczynski remained hospitalized and in serious condition for several days before eventually turning the corner and making a full recovery.

“If it hadn’t been for the quick thinking and astute actions of Detective Barcak, Deputy Schoonover, Sergeant Pavelski and Ms. Harder, Officer Kaczynski might not be here today,” said Akshar. “They displayed courage and calm under pressure, and were instrumental in saving a young officer’s life. On behalf of the 52nd Senate District, I couldn’t be prouder to have individuals of their caliber keeping our communities safe, and on behalf of Officer Kacynski’s family and friends, I say thank you.”

“I know you would have done this for anyone, but I’m so fortunate that you were there for me that day,” said Kaczynski during the ceremony. “There’s no doubt in my mind that I wouldn’t be here today if it weren’t for the four of you. On behalf of my wife and my three children, thank you for everything you’ve done for us, not just on that day but in the weeks and months that followed.”

Earlier this year, Akshar authored and passed a Senate Resolution honoring Detective Barcak, Deputy Schoonover, Sergeant Pavelski and Ms. Harder. He presented them each with framed copies of the resolution and the New York State Liberty Award Medal, the highest honor bestowed by the New York State Senate.

Gov. Wolf: With COVID Cases at ‘Critical Level,’ PA Will Ramp Up Enforcement