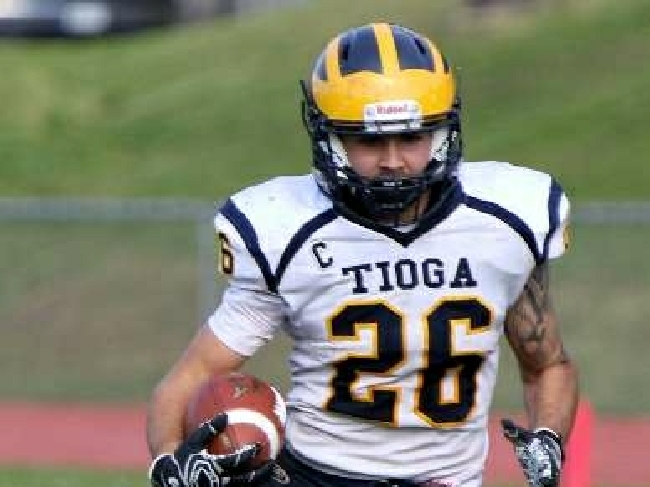 By TIM BIRNEY / Valley Sports Report
(Tioga, NY) – Senior Emmett Wood was the lynchpin for Tioga’s Class D state football championship, and the New York State Sportswriters Association has recognized him as the 2021 Class D “Player of the Year,” while honoring five of his teammates with all-state honors.

Fast and physical, Wood rushed for 2,144 yards and 34 TDs, averaging 12.1 yards per carry. He finished his career fifth all-time in New York State history with 7,367 yards, to go along with 99 rushing TDs.

Defensively, Wood had 42 tackles, including 11 solo stops, four tackles-for-losses, and three QB sacks. He also had two interceptions, both of which he returned for touchdowns, including an 85-yarder in the Section IV championship game.

“Any accolades Emmett gets are well-deserved,” said Tioga coach Nick Aiello. “It’s a nice honor for him, not just recognizing his senior year, but his whole career. I’m very happy for him.”

Aiello believes the keys to Wood’s success are two-fold.

“One, I think the experience of playing at the varsity level since his freshman year really helped him,” said Aiello. “It helped him in terms of performance, and in being one of the team leaders who led us to a state championship.

And secondly, I think the work he’s put in throughout his athletic career, and not just in football, was instrumental,” said Aiello. “His dedication to the weight room, and everything he’s done to make himself a complete player is why he’s been able to have the success he’s had.”

FIRST TEAM
Josh Snell, senior, OL: Snell was a key component on a Tioga line that paved the way for Wood and the Tiger run game to produce 369.7 yards per game, and 10.7 yards per rushing attempt.

“I’m really, really happy for (Josh) Snell,” said Aiello. “I think the fact he got first-team recognition speaks to the work he’s put in to make himself better, but also recognizes his leadership on our offensive line, and his leadership of our team.

“This is tremendous recognition for him individually, and he should be very proud of himself,” added Aiello.

Gavin Godfrey, senior, DB: A physical presence in the secondary, Godfrey had 61 tackles, including 30 solo stops, and one tackle-for-loss. He also had one interception and one forced fumble.

“I’m excited for Gavin (Godfrey),” said Aiello. “He was recognized at defensive back, and he played very, very well for us there, especially after we moved him from corner(back) to free safety.

“Once we moved him to free safety, he made the middle of our defense stronger,” noted Aiello. “It really solidified our defense because he was so aggressive against the run at that free safety position … and it also allowed us to keep our height at the cornerback position.”

Gavin Fisher, sophomore, PK: Fisher was 55 of 66 in extra-point attempts, and also hit a 33-yard field goal. He also featured a strong leg on kickoffs, often driving the ball inside the 10-yard line.

“Gavin (Fisher) kicked very well for us all year long,” said Aiello. “Down the stretch he was clutch, for example in the state semi-final game, on a cold and windy night, he was 7-for-7.

“He was consistent all year long, and not just in kicking extra points, but he helped us with field position on kickoffs,” noted Aiello.

“He’s a kid who came out, worked really hard to be good at his position, and play his role on our team,” added Aiello. “He did a great job for us, and I’m glad he was recognized for it.”

SECOND TEAM
Chris Walsh, senior, OL: Walsh was a key component on a Tioga line that paved the way for Wood and the Tiger run game to produce 369.7 yards per game, and 10.7 yards per rushing attempt.

“I was real excited to see Chris Walsh get this recognition,” said Aiello. “He was an unsung hero for us to a certain degree. He was in the trenches on both sides of the ball.

“He played guard, so a lot of times he was pulling out and leading the way,” noted Aiello. “He came into his own as a senior, and played very well and consistent for us all year long.

“He was also a team leader in his own way,” added Aiello.

Isaac Peterson, senior, LB: A punishing hitter with a nose for the ball, Peterson led Tioga with 102 tackles, including 26 solo stops, and three QB sacks. He also had five tackles-for-losses.

“I’m not going to put too much stock in which team he was on, Isaac (Peterson) was an all-state player,” said Aiello. “He was outstanding for us.

“He was our heart-and-soul, and he set the tone for us defensively,” noted Aiello. “He was a leader in a lot of ways.

“He carried being that stud on defense we needed, very well,” he continued. “He got the kids around him to play very well.

“He played big in our big games, which is what you want to see out of a player like Isaac,” added Aiello.

This story was posted with permission of the Valley Sports Report.

Reps. Pickett and Owlett want your comments about communications company