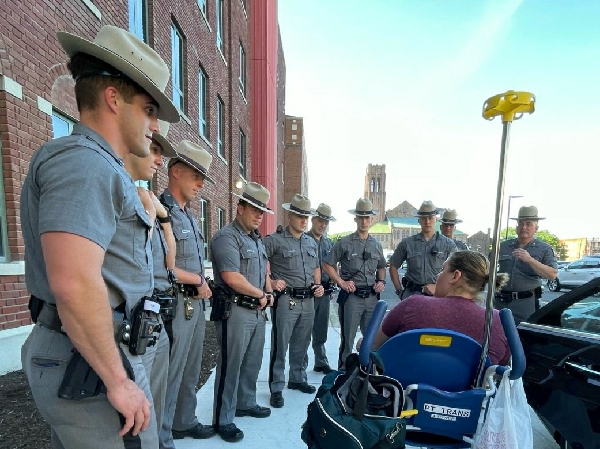 UPDATED: New York State Police Trooper Becky Seager, of the Kirkwood barracks, was released Thursday from Wilson Memorial Hospital. A sea of law enforcement members were there to support her as she was released to go home.

UPDATE 3: Just after 4:30 p.m. Thursday, Jason Johnson was taken into custody near a river bank off State Route 79 in Colesville.  New York State Police want to thank all the supporting agencies who assisted and the public who called with tips.

UPDATED: The New York State Trooper who was shot is identified as Trooper Becky Seager. She is assigned to State Police at Kirkwood and has been a member of the New York State Police for seven years. Trooper Seager was shot in the hip area during the encounter with Jason Johnson on Wednesday night.  Trooper Seager was removed from the scene by a Broome County Sheriff’s Deputy and in the deputy’s car to an ambulance then ultimately transported to UHS Wilson Memorial Hospital.  She sustained non-life threatening injuries. Law enforcement did exchange gunfire with Johnson before he fled from the scene.

On Wednesday, at approximately 8:36 p.m., Broome County Sheriff’s Deputies and members of the New York State Police responded to East Windsor Road in the Town of Colesville to check on the welfare of an individual.

A New York State Trooper was shot by the suspect. The trooper suffered non-life-threatening injuries.

The suspect is identified as Jason D. Johnson, age 34. He is 5’7 and weighs approximately 160 pounds. His hair is longer than pictured and in a long mohawk style. Johnson was last seen in the East Windsor Road area near Thorn Hill.

He is considered armed and dangerous, do not approach him and call 911 immediately.

State Police: 4 of 42 passengers injured in charter bus fire on I-81 near Whitney Point