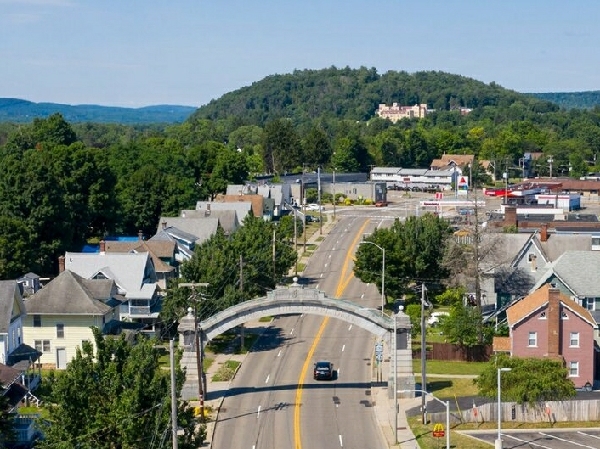 (Endicott, NY) – New York State officials announced Wednesday that the Village of Endicott will receive $10 million in funding as one of the Southern Tier winners of the fifth round of the Downtown Revitalization Initiative (DRI).

A press release issued Wednesday by Gov. Kathy Hochul read: “Endicott now joins Elmira, Watkins Glen, Oswego and Hornell, which were the Southern Tier Region’s winners in the first four DRI rounds, respectively.” Actually, it was Owego that previously received a $10 million downtown revitalization grant in the Southern Tier region and has already completed a significant downtown  revitalization project at two buildings on Main Street in Owego. You can read the story here that was posted on MyHometownToday.com

Each of the state’s 10 economic development regions are being awarded $20 million, for a total state commitment of $200 million in funding and investments to help communities boost their post COVID-19 economies by transforming downtowns into vibrant neighborhoods.

“These revitalization investments are a core part of New York’s efforts to build our economy back after the COVID-19 pandemic and ensure inclusive growth in every corner of the state,” Hochul said. “This proposal from Endicott will spur successful and dynamic development in the downtown area, and with the funding now awarded, I cannot wait to see what the future holds for the residents of this great village.”

Like past DRI rounds, each selected community will develop a strategic plan through a bottom-up, community-based planning process that articulates a vision for the revitalization of its downtown and identifies a list of signature projects that have the potential to transform the downtown and leverage further private and public investments.

In response to the growth of their Advanced Manufacturing I-District, Endicott aims to create a synergistic and complementary relationship between the downtown area and the companies in the district by creating a downtown suited for 21st century jobs. Endicott is already well-underway with this plan as they have seen over $600 million invested in the village in the past 10 years and have public and private projects ongoing or expected within the next 3 years that total $300 million in investment. Building on this momentum, Endicott wants to create new food and entertainment opportunities, improve connectivity, and increase mixed-use space.

Endicott will now begin the process of developing a Strategic Investment Plan to revitalize its downtown with up to $300,000 in planning funds from the $10 million DRI grant. A Local Planning Committee made up of municipal representatives, community leaders, and other stakeholders will lead the effort, supported by a team of private sector experts and state planners. The Strategic Investment Plan will examine local assets and opportunities and identify economic development, transportation, housing, and community projects that align with the community’s vision for downtown revitalization and that are poised for implementation.