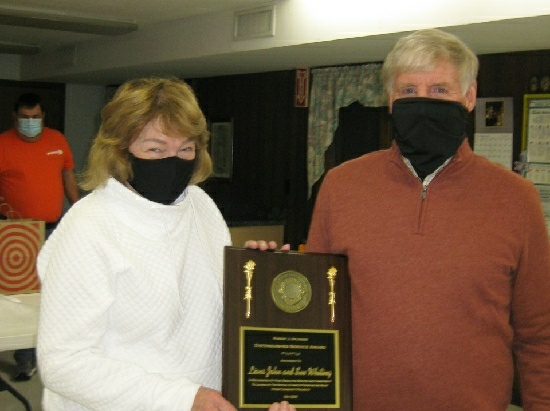 John and Sue Whiting have been members of the Apalachin Lions for several years and have been involved in Special Olympics. In recognition of their dedication to Special Olympics and their on-going involvement in community activities via the Apalachin Lions, they were recently recognized with the Robert J. Uplinger Distinguished Service Award. They were presented with the plaque, letter of recognition and lapel pins at the Lions Wrapping Party on December 9.

The Robert J. Uplinger Distinguished Service Award (often referred to as the “RJU Award”) is presented by a Lions Club or District to a Lion or non-Lion member of the community that has demonstrated a commitment to service over a period of time and that embodies the ideals of the Lions motto “We Serve”. This significant recognition is offered through donations to the New York State & Bermuda Lions Foundation, which provides matching grants to Lions Clubs in Multiple District 20 for projects that benefit their local communities. The award includes an engraved plaque, lapel pin and letter of recognition. The RJU Award is named after Robert J. Uplinger, the first Lion from New York to be International President of Lions Clubs International. 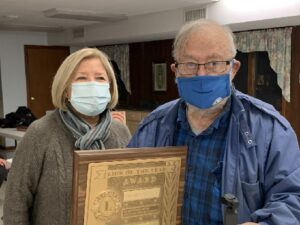 Lion Tom Kelley was named the Apalachin Lions Club’s “Lion of the Year” for the 2019–2020 Lions year.

Lion Tom has been an active member of the Apalachin Lions for over 25 years, serving as Bulletin editor, Lion Tamer and board member several times. Lion Tom was also  presented  the “District Bulletin Editor of the Year” award by the Finger Lakes District. He has served the community in providing Eye Screenings for children, manning the phones for Santa at “Santa Phones” and working on our annual Broom Sale. He is also our club photographer, and if you have ever seen Emmett Kelley at the annual Easter Egg Hunt, that’s Lion Tom.