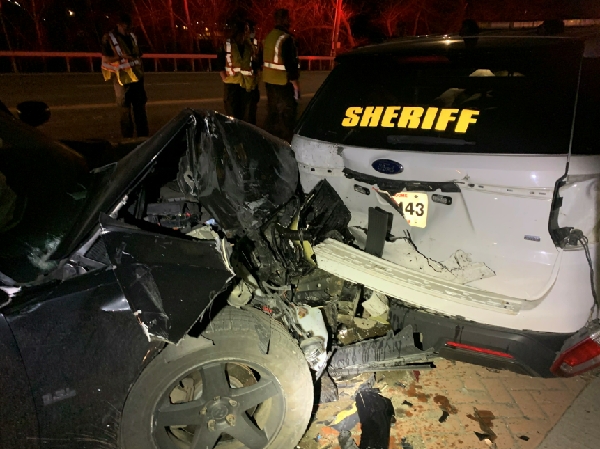 A separate vehicle, operated by Kiarra McGregor, 22, of Binghamton, was traveling west on Upper Court Street and drove directly into the rear of Zielewicz’s patrol car, pushing it forward approximately 25 feet into the rear of the pick-up truck. The operator of the pick-up truck, a 36-year-old male, was struck from behind by the front of the patrol car as it was pushed forward by McGregor’s vehicle, a 2008 Dodge Charger. He was thrown approximately 12 feet and complained of pain to his buttocks. He refused medical treatment. Deputy Zielewicz was not injured.

McGregor displayed signs of alcohol intoxication. She was administered a series of field sobriety tests with poor results. McGregor was arrested under the suspicion of driving while intoxicated.

As a result of the motor vehicle accident, she sustained a minor laceration to her mouth. She was treated at the scene by medical personnel. McGregor was transported to the Sheriff’s Office for additional investigation and arrest processing. While at the Sheriff’s Office, McGregor was asked to submit to a chemical test of her breath but refused. MacGregor was charged with the offenses listed below and released on appearance tickets returnable to the City of Binghamton Court at a later time. Her vehicle was towed from the scene.