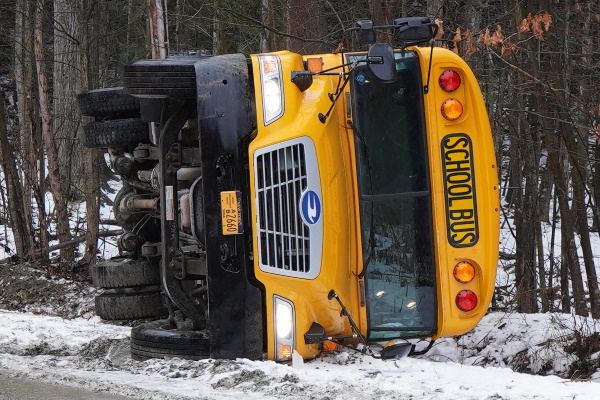 A school bus rolled over near the intersection of Brink Road and Slate Road in the Candor School District Thursday morning. At the time the driver, had only two students on board. Neither were seriously injured. According to the New York State Police one student had a minor laceration to one finger, the other was unharmed. Both were released to their respective parents at the scene. The driver, who was seat belted, was not injured.

Police do not believe the two students were wearing their seat belts at the time, but could not confirm at the scene.

Superintendent Jeffrey L. Kisloski, of the Candor School District, issued a statement mid-morning, confirming the accident and saying neither the driver nor the two student passengers were injured.

Candor Fire and Candor Emergency Squad responded to the scene. A mechanic from the district assisted a local towing company with removal of the bus which has been towed back to the Candor School bus garage for inspection. State Police say the incident is being reviewed, but believe it was cause be icy road conditions. Most area school districts, including Candor were on a 2-hour delay this morning, due to icy roads.