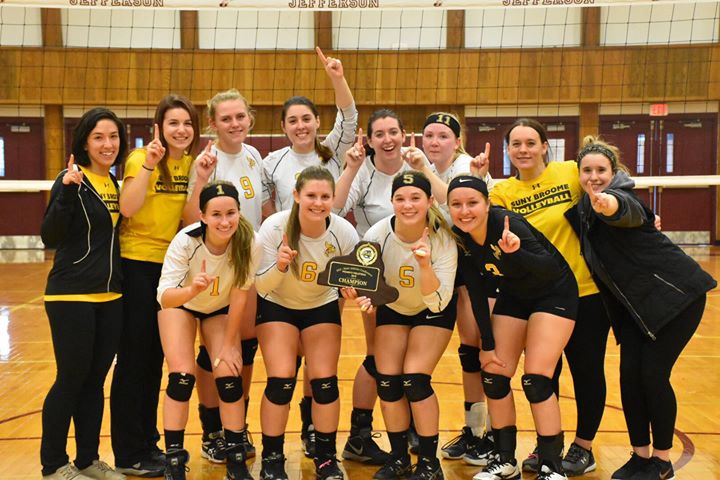 Prior to the start of the semi-final match, Brianna Kosinski, Paige Taylor and Mackinzie Mee were named to the All Conference Team and Coach Eddinger was named Coach of the Year.

Paige Taylor is a 2018 graduate of Owego Free Academy,and Coach Maegen Eddinger is a 2003 OFA graduate.

Jefferson Community College won the other semifinal against Onondaga to advance to the final and face SUNY Broome.

In the Championship match against Jefferson, The SUNY Broome Hornets took the first two sets 25-19 and 25-21 before dropping the third set 21-25. In the fourth set, Broome was down 8-14 before going on a 6 point run with 3 service aces by Mee to even the match 14-14 and Broome went on to win the final set 25-21 and capture the Championship title. Mee led the team with 15 kills and 6 aces. Rayna Pouliot tied her season high with 11 kills and also had 17 digs. Four other players had double digit digs; Alyssa Hovey 20, Donahue 18, Jessica Dye 13, Kosinski 12. Hannah Brown had 3 blocks and Taylor contributed a season high of 10 blocks.

At the conclusion of the match, Rayna Pouliot was named the tournament MVP.

SUNY Broome Volleyball will travel to Niagara Falls next weekend to compete in the NJCAA Region 3 tournament where they are the 2 seed in hopes of advancing to the National Tournament in Rochester Minnesota.